When I studied philosophy at Centre for Research in Modern European Philosophy in London I wrote a thesis on Martin Heidegger and Gilles Deleuze, focusing on their very different conceptions of death. Why this theme? The real motivation behind this study was to try and see some of modern philosophy´s grappling with what is termed by Yeshayahu Ben-Aharon “the Knowledge Drama of the Second Coming”. 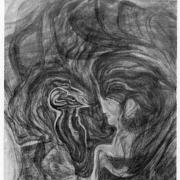 One central aspect of the knowledge drama has to do with encountering death within life – and as readers of Heidegger and Deleuze know, both philosophers wrote about this, although in different, even opposing ways. For Heidegger, this encounter means an experience of nothingness and finitude; man becomes “the lieutenant of the nothing”. For Deleuze, in the Event, death turns against itself, and reveals an encounter with universal, non-organic life.

If this belongs to philosophy, it means that philosophy is already becoming something else than what it used to be; it goes beyond thinking as rational reflection and representation. It – thinking – is becoming encounter, event. Philosophy leads from the grammar of knowledge to the drama of knowledge.

So, what is the relation between the knowledge drama, and an encounter with death? A true knowledge drama involves the creation of a thinking that produces a real encounter with the forces that create our knowing self-consciousness. And according to Rudolf Steiner, these are the forces of death: human consciousness is borne out of a spiritual death. This death-being forms a necessary basis for the evolution of (negative) freedom; freedom in the sense of independence from external forces, which means a darkening and scission of the original human-world wholeness.

Today human life and existence is more and more ruled by these forces, as we develop culture and technology on the basis of this separated ego-consciousness begotten by death.

Only to the extent that we could penetrate into the secret workings of the creation of self-consciousness, and experience how a new life can resurrect from the experience of the forces of death, can we assimilate death into life and begin the creation of a new future reality which create a new human-world relation. This is why the knowledge drama involves an encounter with the forces of life and death. But it is also why the figure of Christ belongs to the knowledge drama: “the assimilation of death into life, this is the secret of Golgotha” (RS)

Cosmologically speaking, this would be the realization of freedom as a positive human contribution in the great chain of being – God renewing herself in freedom through us. According to Rudolf Steiner this evolutionary drama is in our time renewed as the second coming of Christ in the etheric (supersensible life), meaning that the I-AM-power of metamorphosis that can assimilate death into life is potentially flowing into human consciousness more and more. It is a new chapter in the evolutionary drama of freedom.

Anthroposophy is the contemporary knowledge drama of the Second Coming. For me, it was in Ben-Aharon´s book The New Experience of the Supersensible that this drama was brought forth in a way that made it tangibly understandable. By that I do not mean that it is possible to grasp it in the normal way we “get things” and are done with them. This book is an imaginative text which dramatizes the encounter with life and death in the core of self-consciousness, and so requires an experiential and meditative form of reading. There is an incredibly rich and precise imaginative description of the complex transformation of death into life and life into death that lie as the foundation for the modern knowledge drama of the Second Coming, and this must be felt with active thought. The clarity of conceptual differentiation is here steeped in the intensity of thinking-as-will. From this I felt – and can still feel – I encounter Anthroposophy – the living wisdom (Sofia) of the human (Anthropos) – from the inside, from a place where it is being created, and not represented.

…before we continue our research deeper into Life, we must feel ourselves wholly at home in Death. We must strengthen our ability to stand consciously poised in between the divided halves of our life, that is, in the present momentary core of our life’s destruction and resurrection. There we have to build a provisional -but essential- bridge, or rock, at the moment of splitting and division. We must steel our newly awakened consciousness in the midst of that annihilation of our life-time, because here we begin to practice and experience our own, always present, event of etheric crucifixion, death and resurrection as the mystery of modern cognition. The act of knowledge becomes Christ’s Mystery Place of the second, etheric coming. Let us, therefore, hold fast to this Mystery Place of time and explore in greater detail some of its basic features…