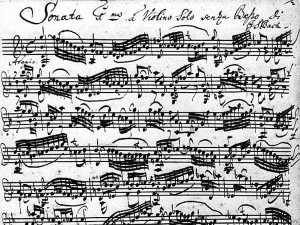 “We think naturally that the past secretes the future ahead of it. But this notion of time is refuted by the melody. At the moment when the melody begins, the last note is there, in its own manner. In a melody, a reciprocal influence between the first and the last note takes place, and we have to say that the first note is possible only because of the last, and vice versa. It is in this way that things happen in the construction of a living being”[1]

This is a basic experience of musical consciousness. It is so obvious we don´t reflect about it, but if we do, we realise that a very different time-consciousness is at work in musical experience, one different from how we usually picture time. It is not a coincidence that so many philosophers – Bergson, Husserl, Marcel, Merlau-Ponty – use musical examples when they attempt to clarify the inner nature of time.

A melody consists of a sequence of tones, following each other in succession. This is chronological time: each tone is a present which is replaced by a new present when the next tone sounds. But no one listens to or plays music in this way. When we hear one tone, the next one, and the previous one, are also present, not as a sensible impression of course, but as a feeling for where the tone comes from and where it is going.

Perception and feeling are always in the now, they are always present states. But the nature of this presence is, as Deleuze puts it, dependent on the contraction of past and future which constitutes it. When we listen to music, the preservation of the past and anticipation of the future is part of the actual listening itself, it constitutes the experience of the ever changing musical now. It is, to use Deleuze´s picture of the imaginative faculty, like a sensitive plate which contracts in keeping the past and anticipating the future, feeling what is to come and what has already happened as constitutive for the actual physical realisation of sound. Constitutive means, it is not something different than the present; it is not a memory which represents a past, and it´s not an imagined future. Such operations would direct us away from the momentary presence. The past and future are contracted into a present, they are what makes this present what it is.[2]

And here comes a central point; this does not only hold for musical consciousness. Such temporal synthesis works in (and as) every perception; it constitutes our perceptions according to Deleuze. In this way, we can in fact say that the phenomenology of a melody can serve as a model for perceptual experience as such. We can even say that musical experience can serve as a model for how life unfolds: it does not proceed from the past towards a neutral inactive future. Each experience is a contraction of past and future into the specificity of this present. It is only that in normal consciousness we don´t experience time as a synthesis. And that is because we ourselves and our form of consciousness are the result of this synthesis. We are it´s dead end. When we model and measure time based on “the given” we miss the creative becoming of time. If we could raise the perceptual activity into consciousness, we would begin to experience each impression as an event, as a process which constitutes a present, in the same way as the now of music is constituted by the forces of the past and the future.

Music can thus teach us about a process which subsist and work continuously underneath our consciousness, synthesising the sensations not only of sight, sound and the other perceptions of the external surrounding, but also those which together form the experience of my own body. Music can teach us how the present can become alive. In this way, we come to see time not as a given, but as a process; it is constantly created.

But in artistic and musical experience, this is different. Here we don´t primarily reflect, we participate in the synthesis of time. This should give us some indications as to how we could access this other consciousness, where we can begin to sense forces which constitutes (what we know as) consciousness.

An idea might be to look closer again into the musicians feeling for timing when playing. As we all know from experience, what decides exactly the moment when a tone is sounded is the feeling for the rest of the phrase, both its past and future, just like Merlau-Ponty put it. The exact placing of each of the notes, all of which together constitute the melody, are local manifestations of a contraction of past and future into the present. This feeling is one which moves from the whole to the part; the feeling for the phrase as a whole decides the articulation of each tone. And this feeling for time as synthesis is one in which “timing” is a formative force – it is felt with the whole body, and not represented.

Time is here active and immanent to the phenomenon as well as the consciousness of the performer. Both the active pole of consciousness, as the spontaneous will which lie behind expression, and the passive receptive pole, as the listening to what sounds physically in the room, are united and mutually implicated into each other. We don´t listen detached from the music, and re-acts expressively to it. We feelingly listen to the music with the same attentive alertness which performs it. This creates a participative consciousness where we participate in something which we co-produce in its emergence. As soon as the music is brought forth, it acquires a life of its own. Music is not simply an internal, subjective affair in the sense of being something that happens in the mind. Just as valid to say that the musical process is in the mind, it is to say that the mind is in and constituted out of the music. An immersed listening feels the past and the future as real push and pull, as real forces, and we form the musical phrases directly out of this listening participation. The more this happens, the more the music itself becomes formative of the expression, and we experience the music to play itself through us.

In chamber music, we can even experience how this immersed listening consciousness can acquire a social status, becoming quasi the genius of the whole group, as if each individual was an instrument of a higher form of agency in which everyone feels the movements and gestures of the music. Then we all participate in a temporal synthesis which everyone co-constitutes but which is also constitutive of everyone´s consciousness.

Whether alone or together, in performance we must follow the music in its own nature, we must listen in an embedded way to how it plays itself through us. The force of time, an expression Gilles Deleuze often uses when speaking about music,[3] can become a tangible experience as the element in which the musician is embedded and works plastically. The great question is then how we can harness this force as a living plastic substance, and use it for building new capacities in ourselves which make it possible to raise the perception of the world and oneself into consciousness as process, as contraction and synthesis. This is the project of music as a transformative practice in the deeper, more concrete sense. [4]

[1] Quoted in Frederick Amrine: “The Music of the Organism: Uexküll, Merleau-Ponty, Zuckerkandl, and Deleuze as Goethean Ecologists in Search of a New Paradigm” Goethe Yearbook 22, page 45

[2] Difference and Repetition, 70. “This is by no means a memory, nor indeed an operation of the understanding: contraction is not a matter of reflection. Properly speaking, it forms a synthesis of time.”

[3] “To enlarge perception means to render sensible, sonorous (or visible), those forces that are ordinarily imperceptible. No doubt these forces are not necessarily time, but they are intertwined and united with those of time. “Time, which is not usually visible…” We perceive easily and sometimes painfully what is in time, we perceive also the form, unities and relations of chronometry, but not time as force, time itself, “a little time in the pure state.” To make sound the medium which renders time sensible, the Numbers of time perceptible, to organize material in order to capture the forces of time and render it sonorous: this is Messiaen’s project, taken up again by Boulez in new conditions.” Deleuze: Boulez, Proust and Time, “occupying without counting”, p.72

[4] This is an excerpt from the paper Music and the potential for a metamorphosis of consciousness given at the Protean Musician conference at The Norwegian Academy of Music, Oslo, November 1-3 2017. The whole paper is posted here.