We know from Steiner´s anthroposophy the image of a vast cosmic drama of evolution, from the first creation as a warmth-substance of beingness (which he calls Saturn-incarnation), to the realization of humanity as the hierarchy of freedom and love in the universe, in far cosmic futures. All of this Logos-created evolution finds its center and turning point in the mystery of Golgotha, when the Logos became flesh. If the first part of this cosmic drama was that of incarnation and descent, making of spirit ever more dense matter, then the mystery of Golgotha made possible the turning point; a gradual ascent and transformation of matter to spirit through the human being. This imagination places the human as the gate through which the divine creative world passes through its created past, making of the old a new Heaven and a new Earth. The mystery of Golgotha made this creative rebirth of the universe possible, but humanity can only realize it by taking up and individualizing the Christ-impulse. Such a spiritualization is of course more than intellectual study or emotional faith alone; it means a real incorporation of the forces flowing from the Christ into one´s being.

Now the Bible, as well as Steiner, speaks about the reappearance of Christ, the second coming. The Bible speaks of it several places, especially in the Revelations. But what does Rudolf Steiner say about this? Let us bring before us a few quotations. Steiner describes the Second Coming of Christ as “the greatest mystery of our time” (25.10.1910) as an event that will begin to unfold among humans in the 20th Century. This will be a momentous event that will change everything, and bring about the emergence of new soul-faculties.

“The event we are discussing is the human acquisition of a new faculty of perception in the etheric realm”. (25.01.1910) “Along with this, there will be great changes, and biblical prophecies will be fulfilled. Everything will be transformed for those on earth, as well as for those who are no longer in a physical body. Regardless of where they are, souls are meeting entirely new faculties.” (25.01.1910)

Anthroposophy is given to prepare for this event.

“The Christ needed a forerunner, and, similarly, spiritual science had to appear to prepare for the age of clairvoyance.” (10 May 1910) “It presents us with a tremendous responsibility, because it is a preparation for the very real reappearance of the Christ”. (10 May 1910) “It is anthroposophy´s task to announce this.” (10 May 1910) “Through spiritual science, we are preparing ourselves to understand the significant era ahead. To be anthroposophist, it is not enough to approach spiritual science as a theory; it must be brought to life within us. This great event must be observed with complete precision.” (18 April 1910) “Spiritual science must bring its fruits to humankind so that souls become capable of joining with Christ. It makes no difference whether those souls inhabit a physical body or not; Christ descended to those who have died as well as to those who are alive on earth. The great, sublime event of Christ´s appearance in the ether is significant for all. (10 May 1910)”

But Steiner also stresses that it can go by unnoticed on the earth if humans are not prepared.

“The faculties I have described are like seeds in the soul. In the future they will be developed and we must say that human destiny will lie, to a certain extent, in one´s own hands” (18 April 1910). “During our epoch, it is more likely than ever before that people will be unable to comprehend this most important event for humanity. People might fail to understand that it provides a real glimpse into the spiritual world, though only a shadowy and vague one. There might be so much evil and materialism on earth, for example, that most of humanity would not show any understanding…” (25 January 1910)

These faculties are described by Steiner in various ways. But they don´t come readymade, they are like seeds in the soul, they must be developed and understood, and as we read above, anthroposophy was given for that purpose.

“A number of souls will have the unique experience of self-awareness, along with the feeling of living in another world – a world entirely different form the one of ordinary consciousness. It will be like a kind of shadowy, vague presentiment, similar to the gift of sight to one borne blind. Through esoteric training, as we call it, clairvoyant faculties will be acquired much more readily, but because humankind continues to evolve, these will also appear naturally – at least in rudimentary form.” (25 Januray 1910) “During the 20th century, new human soul faculties will gradually evolve in some people. Before the end of the century it will be possible, for example, to perceive the human ether body. Another faculty will allow one to look within and see, as though in a dream, an image of a future act. Some will be endowed in such a way that they will have yet another experience; Paul´s personal experience near Damascus will become common for certain people.” (18 April 1910)

These few quotes show how all-important an understanding and awareness of this event is for a real work with Anthroposophy. If we are to speak to the new emerging faculties that many people are borne with today, I believe we need to understand and make conscious this connection, and bring Anthroposophy as a body of teaching into living touch with the super-sensible Being from which it sprang to life through Rudolf Steiner.

Therefore, in my meditations, I first try to make space for such experience to emerge. And to do that I want to go not to old knowledge and representations. Any study of Anthroposophy or indeed anything at all, will necessarily be assimilated and appropriated into the past structure of ones own consciousness, and in this process what I see will inevitably be colored by my point of view and what I bring to the incoming words, thoughts, feelings and intuitions. Therefore I believe one must try to find a moral space of unknowing in which a lack of knowledge is felt as a painful question. Only this I feel can help develop a feeling for the “tremendous responsibility” for this “greatest mystery of our time” in such a way that I might come into touch with it in a living way.

I do this by asking myself how I perceive the past time-stream that elapsed between Steiner´s prophesies and today. Now we are in 2019. What do we see when we look back at the 20th century, and the years 1930´and 40´ especially? How can I relate my study of Anthroposophy, given by Steiner until 1925, with the time that elapsed and everything that happened since then?

I believe it is not wrong to say that we find ourselves placed before an abyss, a feeling as if a great hole opens up, and a darkness of sight. Steiner prophesized the reappearance of Christ as a potential momentous uplifting event, as the next stage in the development of the Christ-impulse on the earth. But when we look at history and spiritual life of humanity with the consciousness that is at our disposal, what we see when we look at the 20th century is not the spiritual Event of the Second Coming, but what must be its absolute reversal into the second world war and holocaust.

The revelation of the Christ-nature of the cosmos and evolution is the central impulse and task of Anthroposophy, and its next evolutionary step was pointed to by Steiner. But we have to admit that we are in darkness when it comes to understanding the relation between the spiritual world and human history with regard to the Second Coming and the absolute evil that opened during the twelve years 1933-45. We could say; what we can see is unimaginable suffering and evil happening on the earth; in the midst of this we do have testimonies about individual experiences of the Christ and of individuals who tell about faculties of spiritual perception. Both of these we can connect with words by Rudolf Steiner, and these things give us a certain direction of sight, but still, looking back at what happened we would have to say: there opens a dark abyss of bewilderment and lack of knowledge about the Event of the Second Coming of Christ in relation to Anthroposophy. The connecting bridge, the heart is missing, when it comes to seeing the Second Coming as a Spiritual Event in light of Anthroposophical spiritual scientific research. Something is missing.

This opens a space of active unknowing, and this is where I place what, as far as I know, 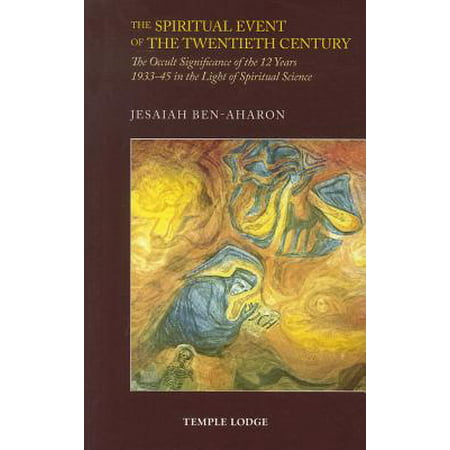 is the only work which actually do light up at this precise point and create the sought for bridge of consciousness between the Second Coming and human history. That is The Spiritual Event of the 20th Century. The Occult Significance of the Twelve Years 1933-45 in Light of Spiritual Science by Yeshayahu Ben-Aharon. This book presents a spiritual scientific imagination of the Second Coming of Christ in the spiritual world and how it relates to the supersensible stream of Anthroposophy. It shows how a revelation and birth of a new sphere of life, the Earthly-Human Sun, took place as a ripening of the 2000 years of spiritual life on earth that connected itself with the stream coming from Golgotha. It also reveals how this Sublime event connected to the super-sensible activity of Anthroposophy and the spread of evil and spirit-forgetfulness on the earth.

With this book we can re-create an imaginative participation in the birth and growth of the “Earthly-Human Sun” as the new stage in the growth of the Christ-impulse implanted into earthly evolution at the mystery of Golgotha. In this way we can also attempt to bring whatever faculties we may have in relation to an objective spiritual scientific imagination of the Second Coming of Christ as their cosmic source. This can become a powerful meditation that can enhance the experience of super-sensible life and deepen the experience of living in an etheric world where life-forces weave between one´s own bodies and an external sea of life and light.

Out of such meditative work with Ben-Aharon´s original contribution to Steiner´s work I feel the esoteric picture of the 20th century can be made whole again to a certain extent; a feeling for the spiritual reality and earthly history in past and future are connected through this imagination and the subsequent work that Ben-Aharon has presented. This is a process that is more an event of healing through real life-forces than building a more accurate representation.

I have done this as part of my meditation in order to create a feeling for what I believe is the centrality and singularity of Yeshayahu Ben-Aharon´s contribution to Anthroposophy. His work represents the connecting bridge between a spiritual consciousness of the Second Coming in its cosmic and human dimension, and the earthly stream of Anthroposophy. In the community forming itself around this impulse, such as the Global Event College and the Independent School for Spiritual Science we attempt to take up and draw closer to a spiritual experience of Anthroposophy as it connects to the Second Coming. We do this based on the understanding, experience and tools that we develop together on the basis of Ben-Aharon´s contribution to Anthroposophy. The school is forming itself to create a community where this anthroposophical task can be creatively explored and experimented with, because we believe we recognize the spiritual truth and significance of this work, and its importance for an anthroposophical understanding of the Second Coming of Christ.